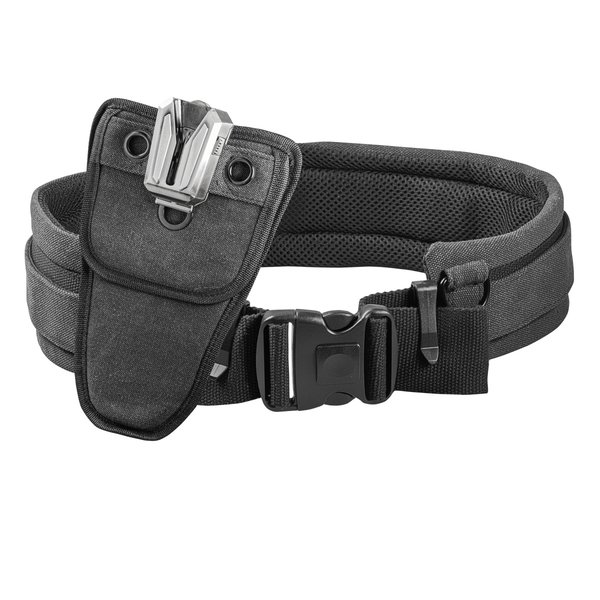 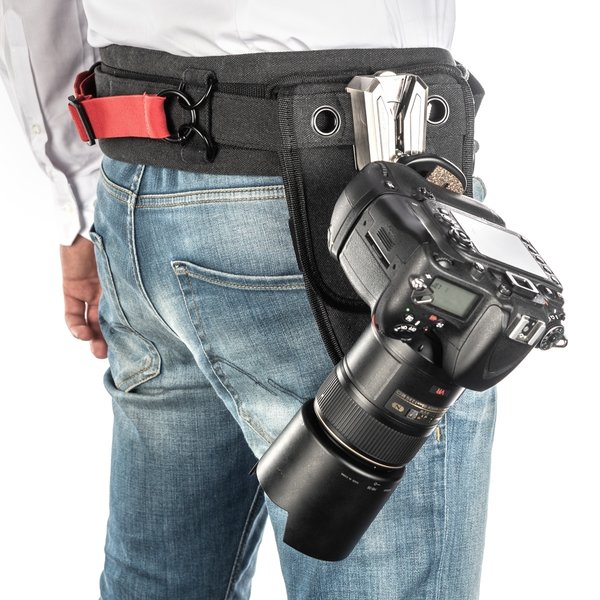 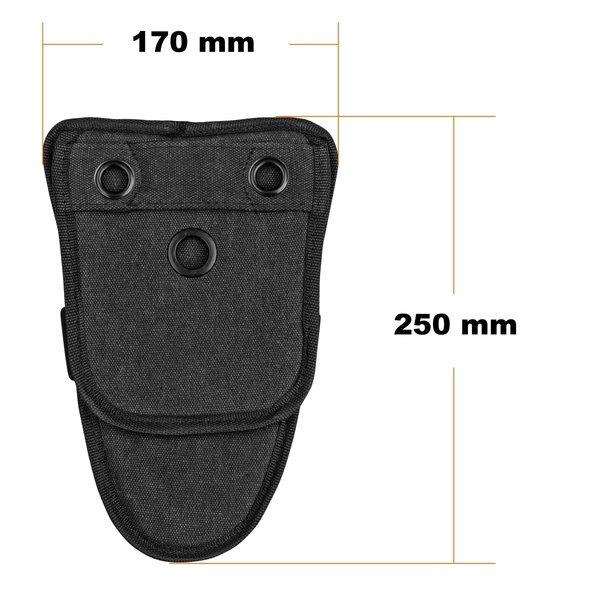 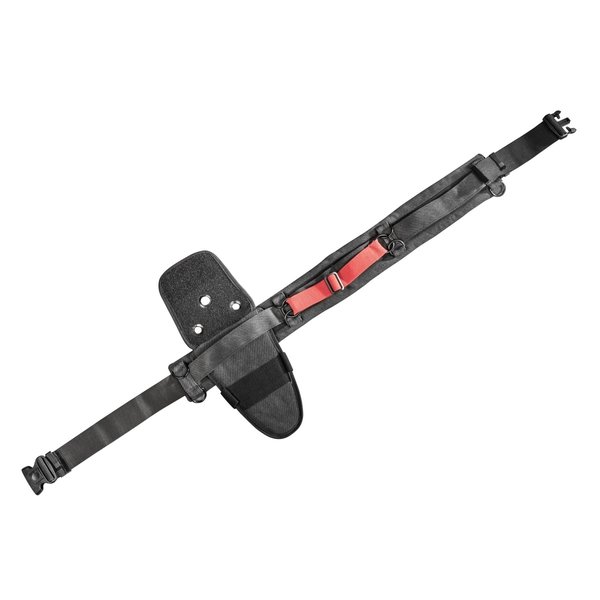 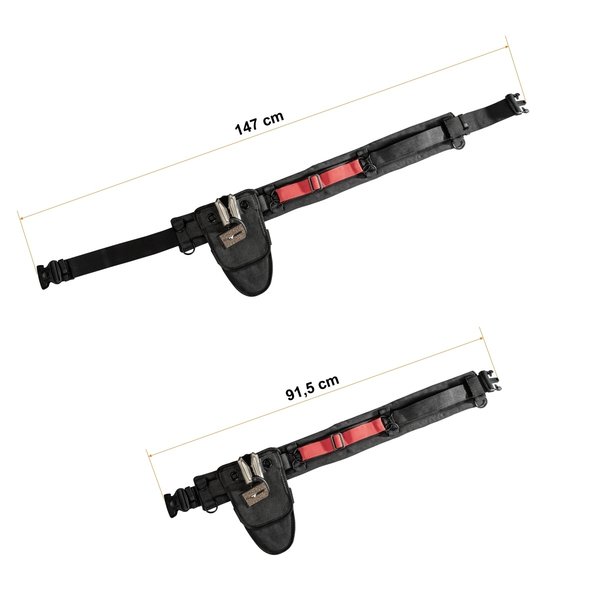 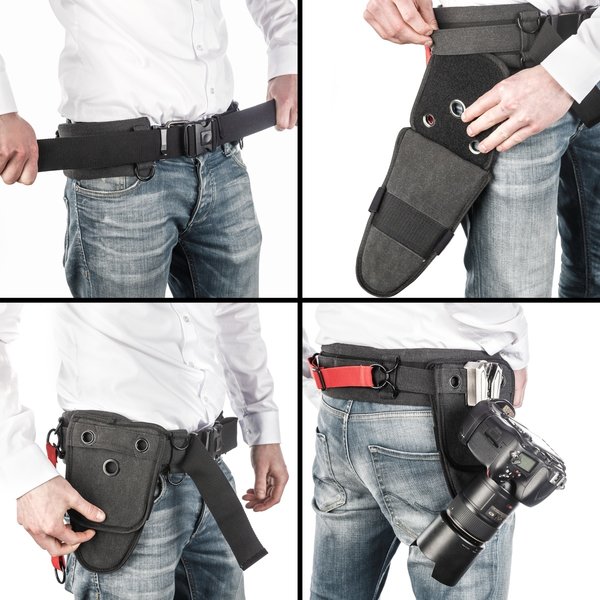 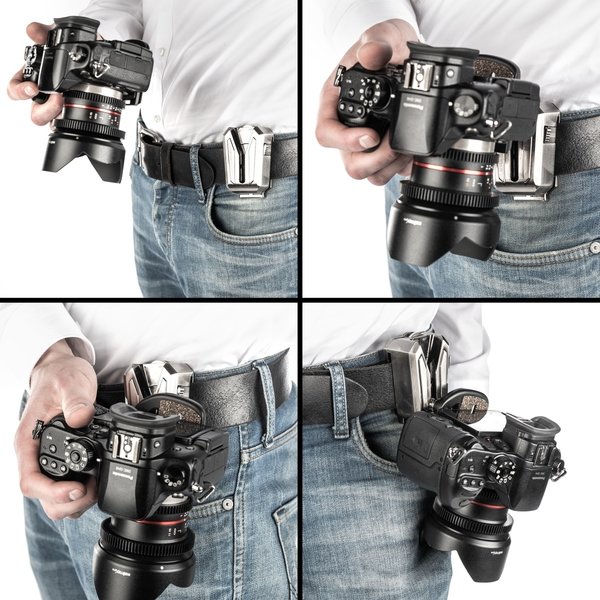 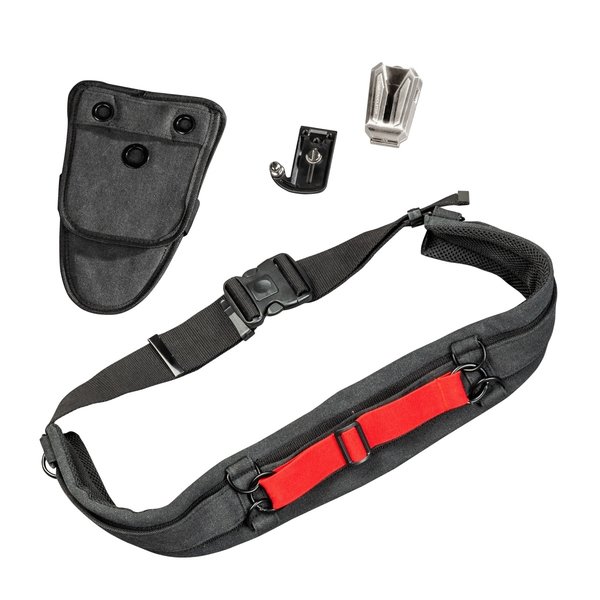 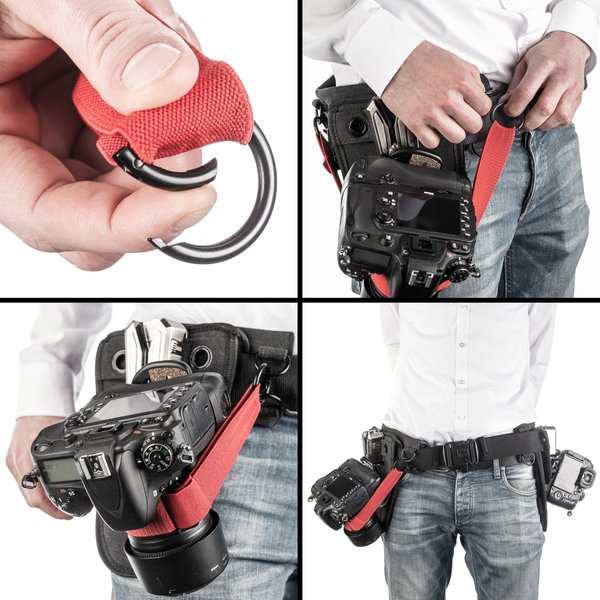 The most obvious connotation of a hip belt with a camera is of course that of a gunslinger with his Colt. Attaching the camera to the belt is really an incredibly practical way to keep the device handy at all times.

Draw the camera like a Colt!
The most obvious connotation of a hip belt with a camera is of course that of a gunslinger with his Colt. Attaching the camera to the belt is really an incredibly practical way to keep the device handy at all times. For this purpose, the camera is equipped with a quick-release plate, the V-Clip, from which a ball bolt protrudes. This ball is inserted into a V-shaped channel on the V-Dock, which is attached to the belt. Now the camera is hanging on the V-Dock. A snap-action mechanism that can be released at the touch of a button prevents the camera from accidentally jumping out of the V-Dock. With a little practice, you can carry the camera on your hip and then pull it faster than your shadow. Okay, almost faster.

The Holster Pad protects leg and camera
Attach the holster pad to the belt - either on the left or right, just as you like it. The holster pad protects your camera from shocks when you move - and it also protects your thigh from bruises from a camera that's flapping around. The holster pad is attached to the camera strap by passing it under the belt. Then fold the upper part around the belt. A Velcro fastener ensures that it remains closed at all times. The fastening only takes seconds.

Safety strap for times of standby
A red, elastic safety strap is attached to the camera belt. You can tighten this strap around the camera and thus secure it against dangling around. It is best to use this function if you will not need the camera for a while. The red safety belt has two ring carabiners that you can use to attach it to the 8 D-rings of the belt. The D-rings can also carry other equipment, such as gaffer tape, gloves or anything else that can be fitted with a carabiner.

V-dock, the central part
The V-Dock forms a unit with the V-Clip. The V-Dock is attached to the camera belt or a regular stable belt. The V-Clip is a quick-release plate that is attached to the camera. The V-Clip is compatible with Arca-Swiss quick release systems, so the camera can also be mounted on compatible tripod heads without modification. The ball bolt of the V-Clip fits flexibly in the V-Dock: The camera can still be rotated freely and can also be swivelled at a certain angle. This prevents damage much more than a rigid mounting would. 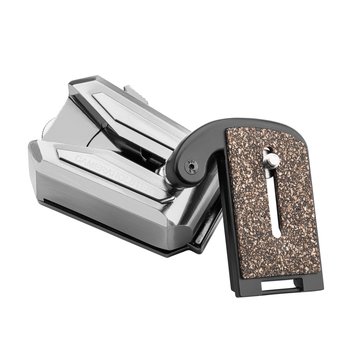