Here’s an image with an interesting history.  It hit position 2 on Flickr’s Explore, it has currently had about 10,000 views and 1,000 votes on 500px – and it was rejected by the client. I’m going walk you through how this image was created, how it was lit and show you previously unseen unedited versions of it and then explain why fundamentally it was a failure.

I was photographing the Madeline Isaac-James 2012 bridal collection for the designer in the Aviator Hotel in Farnborough.  I had two assistant (Keith Fransella and Karen Flower), a whole bootload of Lencarta kit (2 X EP 600, 2 X EP 300 with 2 X Smartflash and 1 X Safari just in case), lots of lighting modifiers and a fairly loose brief.  The client wanted to show off her dresses in a “50s ratpack meets the new millennium style”.  We’d chatted and Skyped for a while and shared tear sheets and ideas.  The client was doing her own styling but we had hair and makeup professionals as well as two models (Victoria and James).  So the team was about 10 people.  We had one day and 14 dresses.  Piece of cake.

The hotel has some pretty amazing architecture and I was immediately drawn to the entrance stairs.  Typically I didn’t shoot these too early in the day as I wanted the whole team to warm up since I knew we’d end up with a statement image.  At about 3pm I set up 2 lights (you’ll see where in a minute) and ran up to the 3rd floor with my camera.  Here are the first few frames off the Hasselblad. 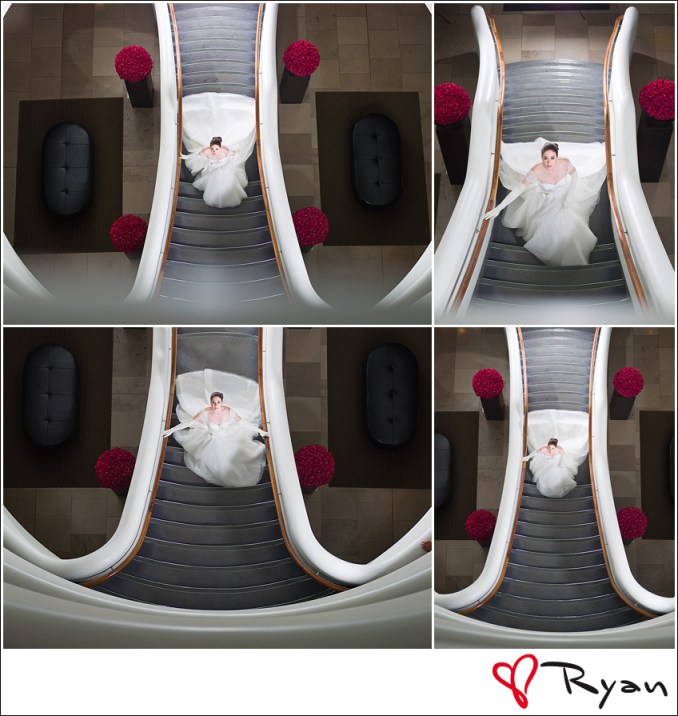 (These are unedited pictures – they are test frames to see how the light is working.  In the bottom left frame you can see one of my assistant’s hands.) 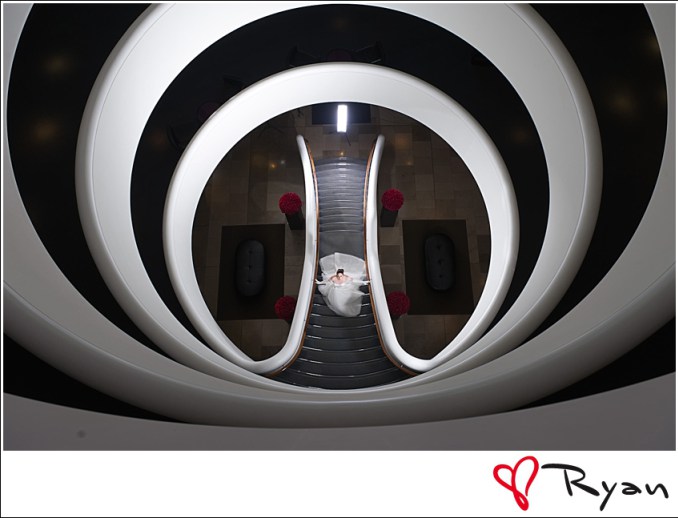 1 and 2 were easily solved.  I wen to the 5th floor and switched to the Nikon.  The widest lens I have for the Hasselblad is 80mm (something like 50mm on a “full frame” camera) but on the Nikon I had a 24-70 zoom with me.  Here’s a shot from the 5th floor with the lens at 26mm.  We’ve moved the front light up to the third floor to give it direction.

This time you can actually see the light that’s causing the problem – I have a stripbox giving light to the back of the dress.  I was pretty sure I was going to move it but didn’t want to change shooting angle, focal length AND light at the same time.

So….I just got the light dragged out of the way and turned off.  Not quite far enough as it turned out.

Here’s the unedited frame the final image was created from. 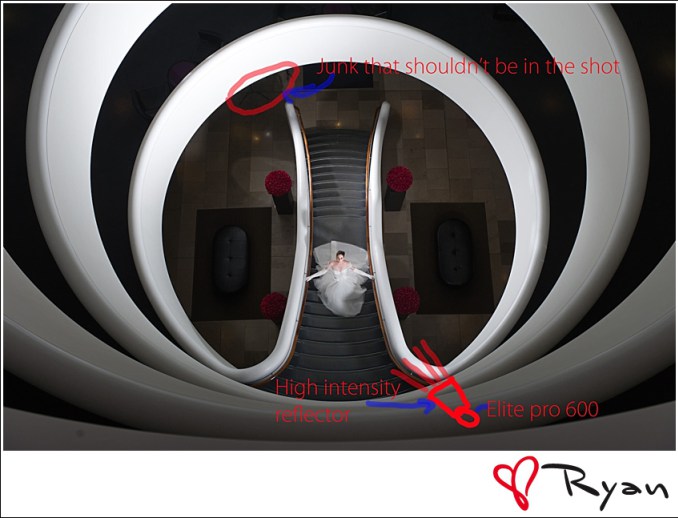 You can see we are now down to one light.  there’s a Lencarta Elite Pro 600 on the 3rd floor just a little off camera axis.   I’m using a high performance reflector to throw the light a long way but keep it in a tightish beam.  I don’t want to light the surrounding area too much.  I’m letting the warmish lighting from the lobby wash into the image and light the ground floor.  The Elite Pro pretty much just lights Victoria.  You can see a little spill near the top left red flowers.  Note that we didn’t quite move the ground floor light far enough out of the frame!

And there you have it – one light, one camera and a bit of quick chimping to fix the shot.  I took 5 frames on the Nikon over the course of 1 minute 8 seconds (including moving the light).  This is the last frame.  Start to finish from the first test frame on the Hasselblad to the last image took 8 minutes.  We were in a rush.

And the client?  Well, she loved it.  But of course it doesn’t show off all the detail on the dress so she went with these shots which I had taken a few minutes before.  I was allowed 8 minutes on the day to play and get some shots for me. 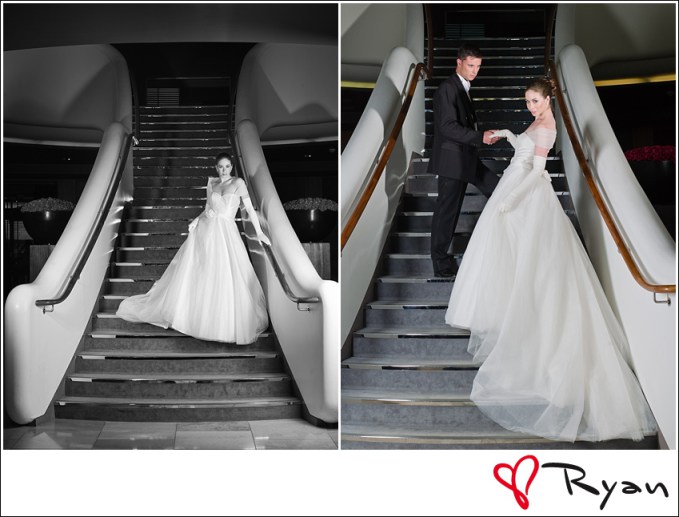 Have questions?  Ask them in the comments below.

Oh and if you want to see more of the shoot – there’s a great behind the scenes on Vimeo.