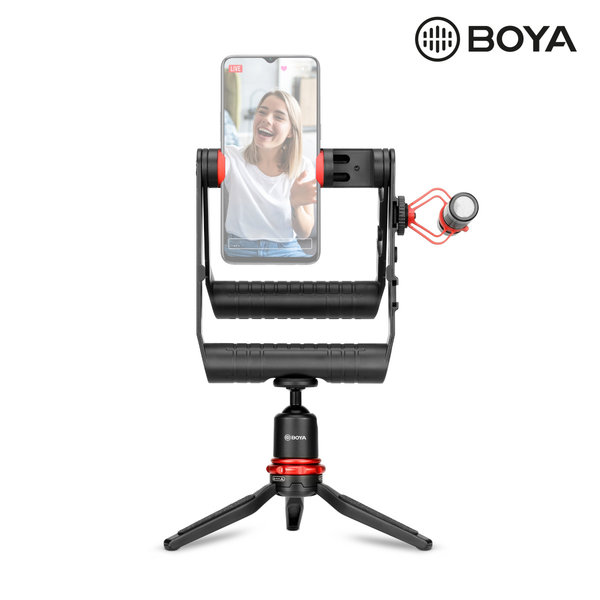 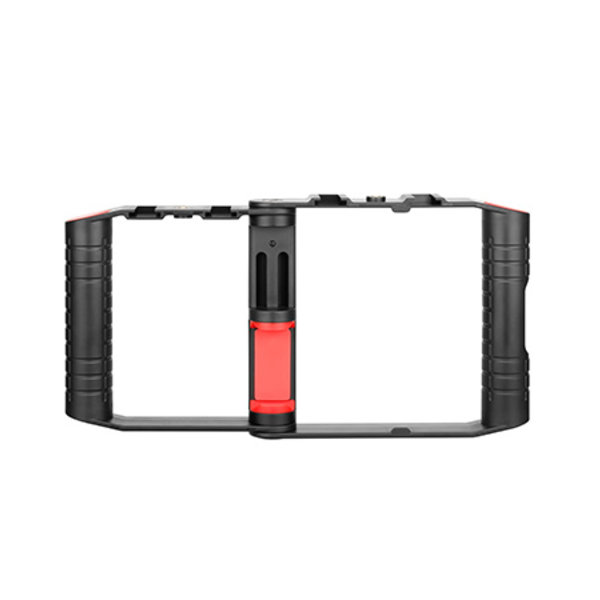 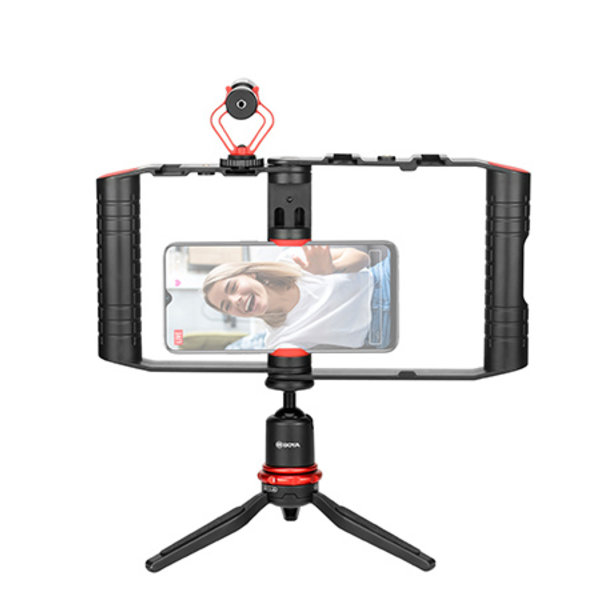 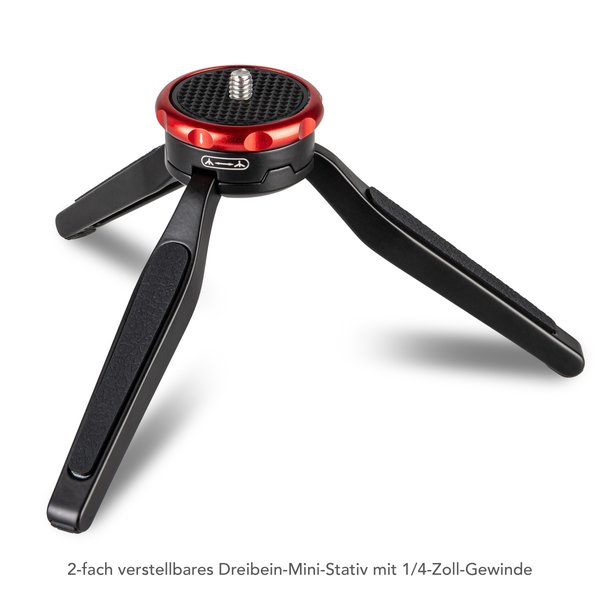 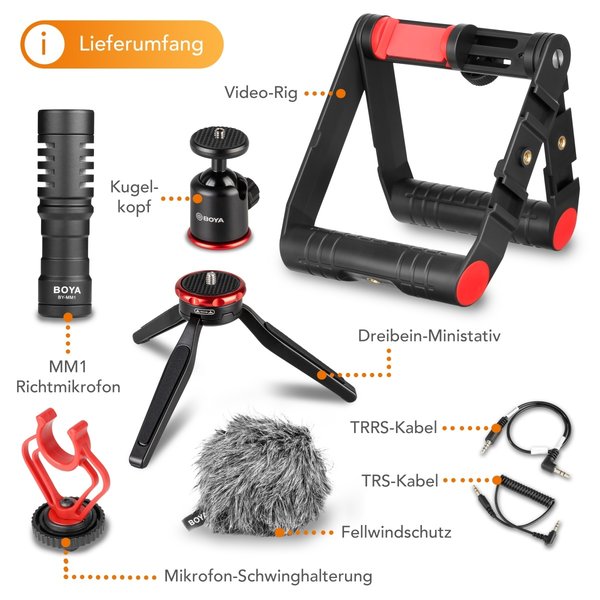 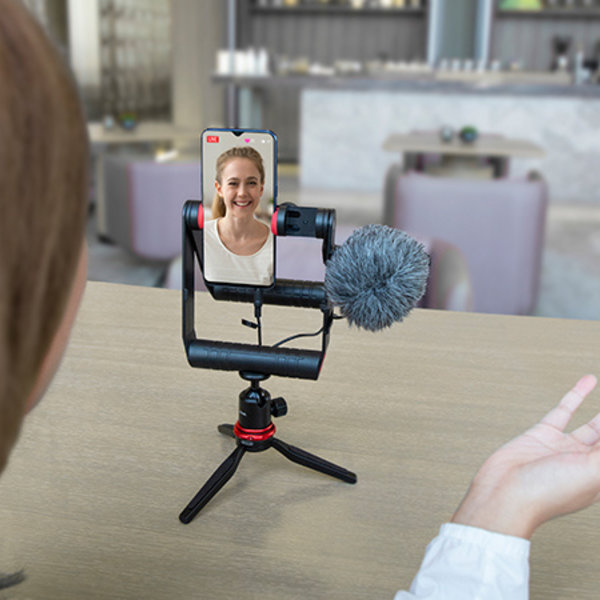 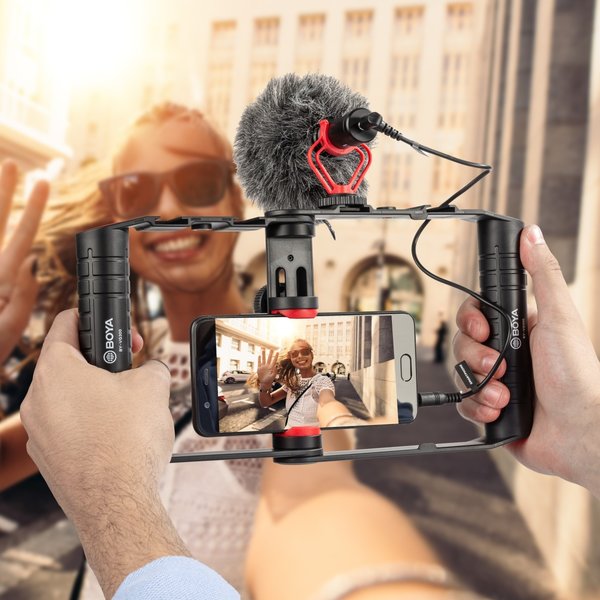 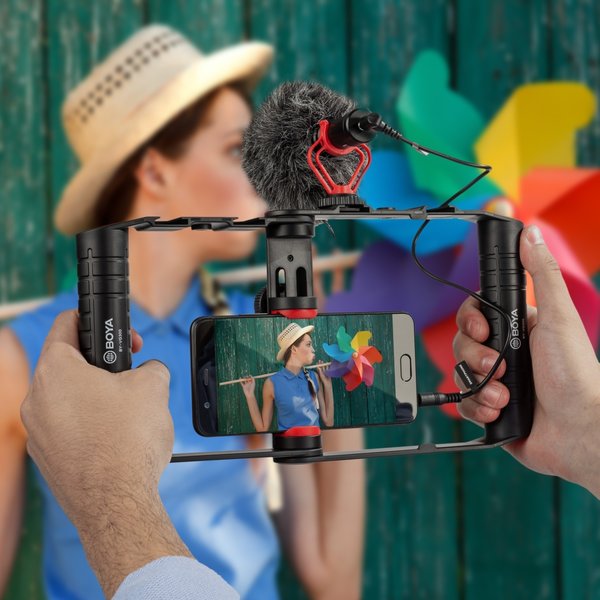 Video rig for smooth camera movements
Thanks to this video rig, shaky pictures are a thing of the past: With the two handles, the smartphone camera can be guided ambidextrously and thus calmly and steadily. The framing can be chosen more easily, and the rig can also be handed over to another person while shooting to make fascinating camera movements possible. There are no limits to your creativity! A smartphone holder in the rig reliably clamps smartphones from 56 to 88 mm wide. You can mount accessories on the four cold shoes, for example, the included shotgun microphone.

Powerful audio for your smartphone
An external microphone delivers far higher sound quality than the internal one. What's more, when filming you can position the external microphone independently of the camera lens in the direction of the sound source. Our shotgun clip-on microphone in this set features a super-cardioid characteristic. This means that mainly the sound coming from the front is recorded, and noise at the back of the microphone is not recorded at all, or only at a low level. The included Rycote microphone is suspension mounted and allows the camera to be used as a handheld camera without recording any operating noise. The included fur windscreen prevents noise caused by wind and draughts, but also plopping noises when speaking loudly directly into the microphone.

Mini tripod with ball head and smartphone holder for interviews and presenting
The included mini tripod with ball head makes it possible to configure the video rig with smartphone, microphone and other mounted accessories for filming, streaming or photography in many different ways. The rig can be mounted upright or in landscape format, allowing the camera to deliver vertical or horizontal video images. The aluminium tripod stands securely and reliably supports the complete setup. With the legs folded up, it can also be used as a handle so that the video rig can also be guided one-handed, for example when walking. The tripod with ball head supports up to 2 kg and is also suitable for use with photo and video cameras. It can be used in two spread positions or with the legs folded together.

Great flexibility when setting up
There are four cold shoes on the video rig onto which accessories such as the microphone can be attached via the Rycote Lyre mount and turned towards the sound source. It also offers a total of three 1/4 inch screw threads for tripods and accessories. You can attach, for example, an LED light, an action cam or other accessories (not included) to the threads and the cold shoes, and the rig itself to a ball head.

Professional sound quality
The Walimex pro Boya MM1 Shotgun Microphone picks up frequencies from 35 Hz to 18 kHz and is therefore suitable for all voices and almost all natural sounds and most musical instruments. It does not need its own battery. Sound recordings of all kinds will be brilliant and can also be used in professional applications. The microphone can also be used with DSLR, DSLM, CSC cameras or video cameras. 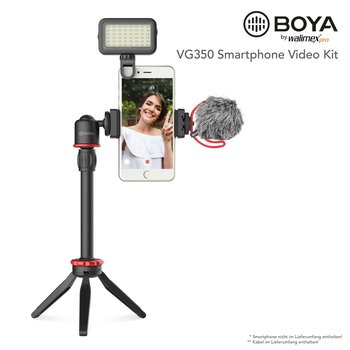 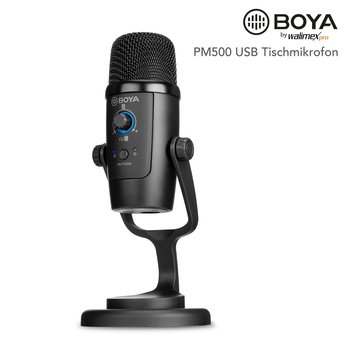 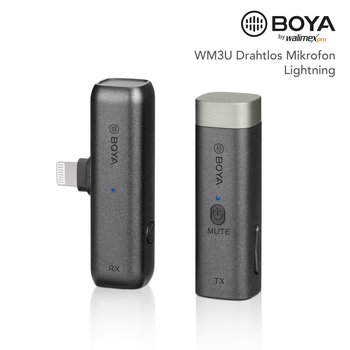 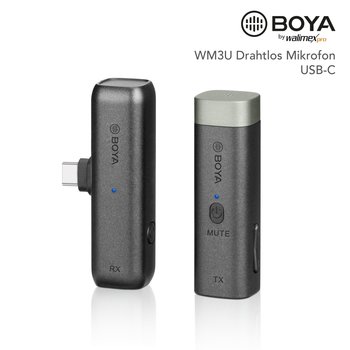